The Stagecrafters is a non-profit semi-professional theater whose purpose, as stated in our By-Laws, is to promote the advancement of knowledge and appreciation of theatre in all its forms, and to encourage the writing and production of drama of a high literary and artistic standard.
Founded in 1929 and incorporated in 1932, this organization is dedicated to making theatrical productions of the highest quality available to residents of Philadelphia and the surrounding communities. Through the years, our commitment to excellence in the art and craft of live theater has drawn to our doors large audiences, has afforded participants the opportunity to become proficient in theater skills and to gain personal enrichment, and has consistently brought us high critical and popular acclaim. We currently produce five shows annually, which encompass a wide range, from classics to edgy contemporary fare: comedy, drama, farce, thriller. We choose plays which are theatrically exciting, artistically challenging, and ideologically relevant, to appeal across a diverse spectrum of tastes and inclinations.
Our current season subscribers number nearly 500, and on average over 1000 people come to see each of the five productions. Our special Halloween show attracts an additional audience of 400-500, and our two annual Reader’s Theater staged readings series likewise in the 300-plus range. In a recent article on The Stagecrafters appearing in the Chestnut Hill Local it was stated that, “[The theater] includes a mixture of professionals and former professionals whose performances rival best of Center City stages….”
Over the past eight decades our company has evolved from a small club to its present status as a full-fledged theatrical organization, guided by a Board of Directors. Various committees are charged with conducting the day-to-day affairs and obligations of the organization, in addition to addressing more long-range issues and challenges as they make themselves evident. The theater, located in the heart of historic Chestnut Hill in northwest Philadelphia, is listed in the Philadelphia Historical Commission Register. Our auditorium accommodates 186 with 184 upholstered fixed theater seats and two wheelchair spaces. The theater auditorium, lobby, and restroom facilities are fully air-conditioned and handicapped accessible.
The facility comprises three structures:
• the largest includes the theater auditorium, dressing rooms, light and sound booths, and the lobby area, which is one of the original eighteenth century structures.
• a two-story barn, connected to the theater space, provides storage for properties, costumes, and construction materials for set building.
• a ca. 1750 house, fronting Germantown Avenue, containing rehearsal and meeting areas, office, library, and additional costume storage space.
The Stagecrafters purchased the property it occupies in 1950, thus being responsible for its maintenance, upkeep, and modernization for the last six decades. We continue to update our buildings and production facilities to meet present-day live performance needs. A full range of technical and backstage capabilities is in place to support our professional production standards. 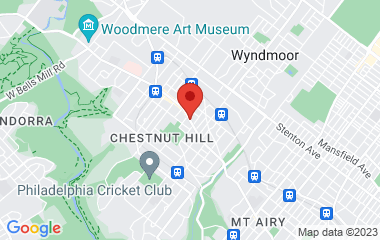